Reflections after returning from a mission trip in El Salvador, to a small canton called Chilitiupan.

While in Chilitiupan, I did service by putting together Basic Necessities Care Packages for Santa Rosa Stitches and delivering them to families in need. I also tried immersing myself with the culture by participating in social activities and interacting with the people. I could not help noticing how friendly the people were. As you passed someone on the street there was always a greeting of Buenos Dias, sometimes this was followed by more conversation that included smiles, hugs and blessings.
﻿﻿﻿﻿﻿﻿﻿﻿﻿﻿﻿﻿﻿﻿

﻿
Another contrast to American life is the cost of everyday items. On our first day, we feed nine people lunch for under $7.00. I bought a pair of sewing scissors for $1.60. The average El Salvadoran makes less than $5.00 a day. If your job is picking coffee beans you might only make .40 cents a day for a hard day of labor. I really reflected on this when I came home and paid $4.50 for a cup of coffee at Starbucks. I made a conscious decision at that time to only buy fair trade coffee and to try to think beyond my own needs.


﻿﻿
﻿﻿﻿﻿﻿﻿﻿﻿﻿
I am very grateful for my life and all of the privileges that I have as an American citizen. I am also humbled by the people of Chilitiupan. 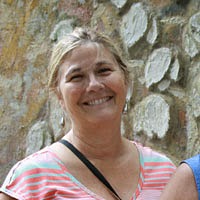 Email ThisBlogThis!Share to TwitterShare to FacebookShare to Pinterest
Labels: Dairy of a Missionary
Location: El Salvador

In Memory of Archbishop Óscar Romero 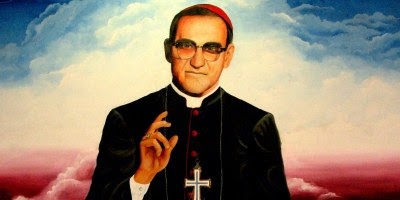 Thirty four years ago today Archbishop Óscar Romero was shot dead while celebrating Mass at the small chapel of the cancer hospital where he lived. It is believed that those who organized his assassination were members of Salvadoran death squads, including two graduates of the School of the Americas.

Óscar Arnulfo Romero y Galdámez (August 15, 1917 - March 24, 1980) was a prominent Roman Catholic priest in El Salvador during the 1960s and 1970s becoming Archbishop of San Salvador in 1977. After witnessing numerous violations of human rights, he began to speak out on behalf of the poor and victims of repression (Read more about his life).

On March 23 the night before his death, during a homily broadcast, Romero pleaded with soldiers to end the violence. The following is an excerpt of this homily:

"I would like to make a special appeal to the men of the army, and specifically to the ranks of the National Guard, the police and the military. Brothers, you come from our own people. You are killing your own brother peasants when any human order to kill must be subordinate to the law of God which says, "Thou shalt not kill." No soldier is obliged to obey an order contrary to the law of God. No one has to obey an immoral law. It is high time you recovered your consciences and obeyed your consciences rather than a sinful order. The church, the defender of the rights of God, of the law of God, of human dignity, of the person, cannot remain silent before such an abomination. We want the government to face the fact that reforms are valueless if they are to be carried out at the cost of so much blood. In the name of God, in the name of this suffering people whose cries rise to heaven more loudly each day, I implore you, I beg you, I order you in the name of God: stop the repression." (Read the full Sermon)

On each anniversary of his death, El Salvadorans march through the streets in memory of him. Mothers make pupusas (thick tortillas with beans), pack them, and prepare the children for a two-to-four hour ride or walk to the city to remember the gentle man they called Monseñor. 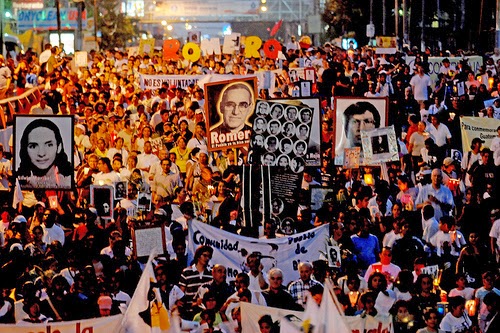 The Monument to Memory and Truth

On our last mission trip to El Salvador we were fortunate enough to experience some Salvadoran history by visiting The Monument to Memory and Truth. The Monument to Memory and Truth is a 85 meter wall of black granite that lists over 28,000 names of civilian victims of the Salvadoran Civil War (1980-1992). The monument was created by the Committee Pro-Monument to the Civil Victims of Human Rights Abuse and was inaugurated in December 2003 in Cuscatlán Park in the capital, San Salvador. 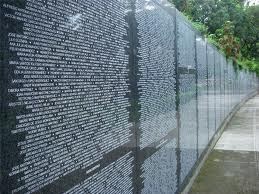 "A space for hope, where we can continue dreaming and build a more just, human and equitable society” reads the inscription on the monument. The photo below shows a portion of the monument which is a depiction of the Salvadoran people carrying a picture of Archbishop Óscar Romero. Archbishop Óscar Romero spoke out against poverty, social injustice, assassinations and torture. He was assassinated on March 24, 1980 and is listed on the wall as one of those lost during the war. The Salvadoran Civil War claimed the lives of over 75,000 Salvadoran civilians and personally touched the vast majority of Salvadorans. For many of the families who lost loved ones through homicide, kidnapping, forced disappearances, or massacres, there was no place to go to remember and grieve their loved ones. This monument was built for the families that lost loved ones and as a memory of the devastation brought on by the Salvadoran Civil War. 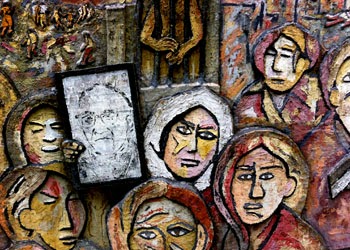 To view a full list of names along with the date the loved one was lost and how they were lost please see the following website (www.memoriayverdad.org/index.html).
Posted by Unknown at 10:50 AM No comments: